In celebration of Billy Strayhorn's centennial year, world-renowned educator, composer, arranger and pianist Bill Dobbins continues his explorations into the music of major jazz composers. These live solo performances, recorded at Eastman's Kilbourn Hall and Hatch Recital Hall, focus on the music of Duke Ellington and Billy Strayhorn, whose collaboration is one of the most unique in the history of jazz, if not all of Western music. The repertoire ranges from well-known classics by these jazz giants to seldom heard and more recently discovered works, carefully selected to represent the full range of their musical creativity and arranged by Dobbins in a manner reflecting nearly forty years of research, analysis and performance.

[ 4.5 stars ] Jazz pianist and educator Bill Dobbins is perhaps best known as a fixture at the Eastman School of Music since 1973, with a concentration that includes lots of large-ensemble work. He is also well suited as a player of classical music. So it should come as no surprise that Dobbins’ approaches to the music of Duke Ellington and Billy Strayhorn,(on Vol. 2) and George Gershwin and Clair Fischer (on Vol. 1) would be like wearing a familiar, comfortable jacket. Listening to Dobbins’ playing on these two recordings—solo piano recitals before live audiences on the Rochester campus—one gets a sense of the vast range inherent in his playing.

Listeners will certainly be impressed by the amount of improvisation Dobbins adds to so many of these familiar, ageless themes. Take Ellington’s “Band Call,” played as a reharmonized swinger that sheds new light on this classic from the post-swing era. But then he can go in another direction, as he does with Gershwin’s “Prelude II,” the famous solo piano piece that works like a miniature of orchestral splendor and woe.

Likewise, Fischer’s “When Autumn Comes” and Gershwin’s “How Long Has This Been Going On” are filled with charming moments of gentle, graceful uplift without the need to say everything or extemporize to the fullest. Dobbins’ patience with these songs is tangible, like he’s been living them his whole life. 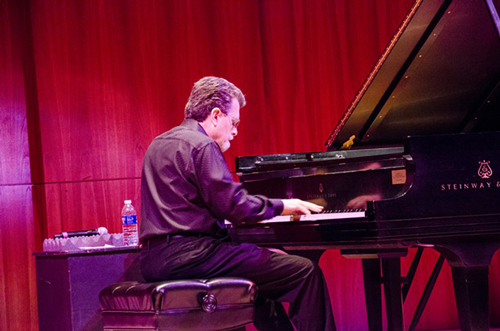 Bill Dobbins performed a tribute to Strayhorn at Hatch Recital Hall as part of the 2015 Xerox Rochester International Jazz Festival.

Over at Hatch Hall, Eastman School of Music Professor Bill Dobbins was celebrating the centennial year of the composer Billy Strayhorn. It was a scholarly presentation with lots of footnotes about the tunes, but this scholar has some great piano chops. There was no "Lush Life" here; Dobbins delves much deeper into the more obscure parts of Strayhorn's oeuvre. It's a safe bet most members of the audience were hearing tunes like "Boll Weevil Ballet" for the first time.

Another great composition, new to me, was "Hearsay," an evocative movement from his (and Duke Ellington's) "Deep South Suite." But there were also songs like "Johnny Come Lately" and "All Day Long," compositions just as brilliant, but also ripe for Dobbins' fanciful improvisation.

The musical relationship between Duke Ellington and Billy Strayhorn is, perhaps, unique in the history of western music. Joining the Ellington organization in 1939, Strayhorn’s initial duties sere primarily arranging popular song hits of the day in the style that Duke had already established since the mid 1920s. Although Strayhorn had total access to Ellington’s scores during his first years in New York, it would not have been possible for him to have written so convincingly for the Ellington orchestra if his own musical sensibilities were hot uncannily similar to Ellington’s to start with. Ellington must have noticed this when he first heard Strayhorn play some of his pieces at the piano during their first meeting after an Ellington concert in Pittsburgh, where Strayhorn grew up.

While most fans assumed that the orchestra’s theme song, Take the ‘A’ Train, was written by Ellington, it was actually Strayhorn’s composition. Indeed, many Strayhorn enthusiasts argue, unjustifiably, that Strayhorn wrote the most striking compositions in the orchestra’s repertoire, the fact is that Ellington composed a decided majority of the music between 1939 and Strayhorn’s untimely death from cancer in 1967. For those who are interested in exactly what compositions and arrangements were Strayhorn’s, Walter van de Leur’s engaging and informative book, Something to Live For: The Music of Billy Strayhorn, is highly recommended.

As the output of both Ellington and Strayhorn are unusually voluminous, I included a mixture of familiar pieces, rare gems and, in the case of Strayhorn, one of about fifty previously unrecorded pieces discovered in the mid 1990s by van de Leur at the home of the executor of Strayhorn’s estate. From my own perspective, the music of both men is, as Ellington liked to put it, “beyond category”, bringing together the most fertile and expressive elements of the blues, ragtime, jazz and classical music from Bach to Shostakovich.

The opening piece, Band Call, is from the mid 1950’s. When the orchestra had extended engagements in nightclubs it was not uncommon for a set to begin with only a few musicians actually on the bandstand. The two percussive chords heard toward the end of the opening sections of the piece are an alliteration of the title, calling out “Band Call, gentlemen. The next set has already commenced!”

The Shepherd (Who Watches Over the Night Flock) is an alternatively pensive and strolling number in a minor key, and with strong blues overtones. It was intended as a musical portrait of the Reverend John G. Gensel, Lutheran Pastor to the jazz community, and was included in Ellington’s Second Sacred Concert (1968).

Meditation, also from the Second Sacred Concert, exemplifies Ellington’s impressionistic side, which was apparent in such works as the 1938 Subtle Lament even before Strayhorn entered his life. The 1953 trio LP, Piano Reflections, offers the most extensive view of this side of Ellington’s complex and multifaceted personality.

In terms of Ellington’s piano playing there is, perhaps, no better representation of his exotic side than Amour, Amour, from the Togo Brava Suite (1971). This is also one of several pieces that shoe Ellington’s awareness of pianists such as Horace Silver, who combined elements from Latin music with jazz and the blues. Of course, Ellington was able to reflect this and other genres in a personal manner that went much deeper than mere imitation.

Second Portrait of The Lion goes back to Ellington’s stride piano roots and acknowledges his high regard for Willie “The Lion” Smith, who befriended the young Ellington when he had first moved from Washington D.C. to New York. The main idea in the slow sections of this piece, first recorded in 1965, resurfaced a couple of years later with fresh harmonies and a different formal structure as A Chromatic Love Affair.

Warm Valley, written for Johnny Hodges in 1940, is as beautiful a ballad as any Ellington came up with. His piano introduction form the first recorded version sounds as fresh today as it did then.

Johnny Come Lately (1942) the first of the Strayhorn selections, is one of the few Strayhorn swing tunes in a minor key, and the mood has at least a tinge of the sinister. As with Ellington’s work, Monk certainly was paying attention to this. My introduction takes the composer’s opening flourish and develops it a bit further.

Boll Weevil Ballet was discovered by Walter van de Leur, and was a part of the show, Beggar’s Holiday (1946), a reworking of John Gay’s The Beggar’s Opera (1729). According to David Hajdu’s Lush Life: A Biography of Billy Strayhorn, the piece was literally written overnight when one of the directors decided that the show needed a ballet number. Although I added a little Bartók variety “night music” as an introduction, the bitonal boogie –woogie blues towards the end is exactly what Strayhorn wrote.

The pairing of my harmonically embellished themes from the early Debussy piano piece, la plus que lente with Strayhorn’s Passion Flower (here played in a Latin vein) comes from an arrangement I wrote for the pianist Steve Kuhn and the Eastman Jazz Ensemble, when he visited the school in the early 1990s. Steve had paired the two pieces similarly on one of his trio CDs, but with only the first theme of the Debussy piece. I really enjoyed reducing the big band arrangement in this solo piano version.

The simple yet elegantly beautiful ballad, After All (1941), is a particular favorite of mine. Johnny Hodges deeply moving performance on the Ellington album, And His Mother Called Him Bill (1967), recorded shortly after Strayhorn’s death, made me want to try a version for piano.

Ellington himself frequently played Lotus Blossom as a solo number from the time of Strayhorn’s passing until his own death in 1974. An exquisite blend of 19th century Romanticism and the Great American Songbook, it seemed like the perfect ending for this tribute to two of my favorite jazz composers/pianists.

I would like to thank Ray Cordello, Lou Chitty and Rich Wattie for their assistance in documenting these performances, and Jeff Penney for his interest and support in carrying this project forward. Thanks to John Nugent for his friendship and support in programming my solo programs at our summer XRIJF. I would also like to thank my wife, Daralene, for her constant support, encouragement and inspiration.